Steven Kroman
Steven Kroman is a second year M.A. student in the Foreign Language Education program at The University of Texas at Austin. He earned his B.A. degree in Economics with a minor in Japanese Language and Literature at Boston University and spent four years teaching English as an assistant teacher in junior high schools in Shizuoka and Aichi prefectures.

Jenna Moriwaki
Jenna Moriwaki earned a B.A. degree in Japanese Language and Literature and English at Boston University. She taught Japanese in the JET program and Teach for America at Waianae High School. Currently she is a M.A. student in the Teaching program, focusing in Secondary Education at Johns Hopkins University.

Ben DeTora
Ben DeTora earned a B.A degree in Japanese Literature at Boston University. Currently, he is a freelance translator and second year East Asian Studies MA student at Washington University in St. Louis. He has worked in Ehime and Shikoku as a teacher in the JET program.

Aurora Tsai
Aurora Tsai is currently a first year Ph.D. student in Second Language Acquisition at Carnegie Mellon University. She earned her M.A. in Second Language Studies at the University of Hawaii at Manoa and her B.A. in Biology at Boston University. Between her B.A. and M.A., she also spent two years teaching English for the JET program in Kumamoto Prefecture. She also happens to be a huge fan of Kumamon, a bear character that serves as Kumamoto's mascot.

Margaret Ngo
Margaret received her B.A. in East Asian Studies and Japanese Language and Literature at Boston University. She is currently living and working in Seattle where she manages events and lovingly curates a wide selection of literature for Kinokuniya. She delights in tackling the complexities of translation and localization and actively lends her writing and language skills to a variety of projects. She hopes to further pursue her broad interests in classical Japanese literature and literary translation in a future graduate program.

Cecillia Caride
Master's student at the University of Michigan School of Information. Studying Japanese since 2002.

Margret Gordon
Hello, my name is Margaret Gordon. I graduated from Boston University last May. While at school, I came to know professor Anna Elliott and was introduced to translation for the first time. Immediately I became interested in this topic. Although I am an American, I was actually born in Japan. Therefor, I have an inner understanding of the vagueness that so often appears in Japanese. I often feel like I am a mix of Japanese and American so translation is perfect for me in many ways. I especially have experience translating short stories by Haruki Murakami and have even won an award for my work on his latest novel, "The Colorless Tsukuru Tazaki and His Years of Pilgrimage." 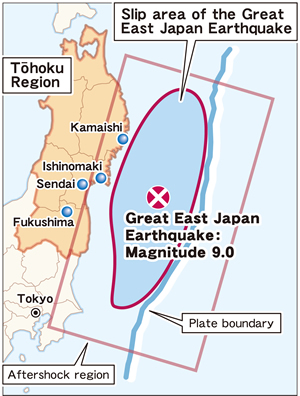 So as to allow people around the world to know of and share in the lessons of the Great East Japan Disaster, Kahoku Shimpo is making public the English translation of its “Wagakoto” series in several installments. The translations were prepared by student volunteers from Boston University and the University of Michigan in cooperation with the staff of the Edwin O. Reischauer Institute of Japanese Studies at Harvard.